Dubbed Apple’s “iPhone City”, Zhengzhou Foxconn is the largest iPhone factory in the world. Spanning 1.4 million square meters, it is here that workers toil daily to produce half of the iPhones sold worldwide. The working conditions have remained relatively the same over the years the investigators were employed at the factory. The base wage remained at 2100 RMB ($295 USD), insufficient to sustain the livelihood for a family living in Zhengzhou city. Although social insurance contributions have increased from 2015 to 2018, this still falls short of the legal requirements. Pre-job safety training was shortened from two days to one day in 2017.

To manage the influx of orders during peak season, Foxconn employs student workers and dispatch workers. Student workers have been forced to work overtime hours, completing internships at the factory that are unrelated to their degree. Foxconn outsources hiring to dispatch companies and to attract workers, these companies offered bonuses for workers who are employed for a certain period of time. The bonuses fluctuate according to the demand for workers at the factory. However, many workers have reported never been paid their bonus. The factory’s internal references program is another tactic used to hire more workers during peak season. Workers are given referral quotas to meet, and the factory takes away the overtime hours of those who do not fulfill the quota as a form of punishment. 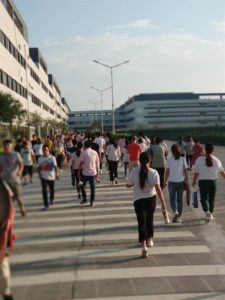 (Workers on the way to work)

Chinese labor law stipulates “dispatch workers shall not exceed 10% of the total employed workers.” and “the monthly overtime work hours shall not exceed 36 hours.” Although Apple and its supplier Foxconn are aware of these restrictions on dispatch workers and overtime work hours, they do not implement these regulations. The Chinese government does not properly enforce laws, especially laws regarding labor rights. Multinational corporations helped drive economic development in China but they have also exploited loopholes in Chinese labor laws.

Apple has removed more than 25,000 applications from its app store because of China’s Law and Internet regulations, and moved the iCloud accounts of Chinese users to a local data center. Facing pressure from the Chinese government, Apple must follow these rules and regulations. On the other hand, Apple has done very little to improve the rights of workers in their supplier factories. Apple claimed they care about every worker on the production line, but in fact, workers are paid wages that are close to or equivalent to the local minimum wage. It is difficult for workers to sustain their livelihood on the minimum wage. Workers see overtime as a “benefit”, as they can earn more and receive a decent paycheck every month. Workers put in more than 10 hours a day and these long working hours attracts workers to apply for work at Apple’s supplier factories.

Over the past 10 years, China Labor Watch has conducted dozens of factory investigations and provided workers with knowledge on human rights and labor rights. The organization has received several complaints from workers on Apple’s production line. Workers have said they are exposed to toxic chemicals every day, but do not receive sufficient personal protective equipment; when they are sick they are still forced to work overtime; managers verbally abuse workers on a regular basis and sometimes punish workers by asking them to stand. Some female workers have even experienced sexual harassment while working on the production lines. We are trying to promote human rights and values from Western countries, but the manufacturing process of these products from Western companies is a process of violating human rights and is even produced by exploited workers.

Apple releases a supplier responsibility report every year, and has its own supplier code of conduct to ensure its suppliers “provide safe working conditions, treat workers with dignity and respect, act fairly and ethically…”. However, our recent findings on working conditions at Zhengzhou Foxconn highlights several issues which are in violation of Apple’s own code of conduct. Apple has the responsibility and capacity to make fundamental improvements to the working conditions along its supply chain, however, Apple is now transferring costs from the trade war through their suppliers to workers and profiting from the exploitation of Chinese workers.

Tim Cook, the CEO of Apple, recently said that Apple must adhere to corporate social responsibility standards. Although it might be far away from reaching international standards, Apple can start with pressuring its suppliers to follow Chinese labor laws. The Chinese government does not allow freedom of association for workers; however, Apple should not take advantage of this and violate workers’ legal rights. To start with, Apple should urge their suppliers to abide by relevant laws regarding the number of dispatch workers recruited, in addition to the overtime hours workers put in. These are rights stipulated by Chinese labor law.

Li Qiang, executive director of China Labor Watch, says: “Apple and Foxconn know that the issue with dispatch workers is in violation of labor laws, but because it is profitable to hire dispatch workers, they haven’t addressed the issue. They have allowed these violations to continue over the years.”

• New workers have a probationary period of three months and if they wish to resign during this time, they must apply three days in advance.
• During peak season, regular workers’ resignations won’t be approved.
• After completing resignation procedures, factories will pay workers in around two weeks with no pay stub provided that month.
• Some dispatch workers failed to receive their promised bonuses from the dispatch company.
• The factory does not pay social insurance for the dispatched workers.
• In 2018, dispatch workers made up 55% of the workforce. Chinese labor law stipulates that dispatch workers must not exceed 10% of the workforce. In August 2019, around 50% of the workforce were dispatch workers.
• During peak production season, student workers must work overtime. However, according to regulations on student internships, students are not to work overtime or night shifts.
• Chinese labor law mandates that workers must not work more than 36 overtime hours a month. However, during the peak production seasons, workers at Zhengzhou Foxconn put in at least 100 overtime hours a month. There have been periods where workers have one rest day for every 13 days worked or even have only one rest day for a month.
• Workers have to receive approval not to work overtime. If workers do not receive approval and choose not to work overtime anyway, they will be admonished by the line manager and will not be working overtime in the future.
• If work is not completed by the time the shift ends, workers must work overtime and workers are not paid for this. If there are abnormalities at work, they must work overtime until the issue has been addressed, and work done during this time is also unpaid.
• Workers sometimes have to stay back for night meetings at work, and this time is unpaid.
• The factory does not provide workers with adequate personal protective equipment and workers do not receive any occupational health and safety training.
• The factory does not provide a single training class on fire safety and other relevant knowledge.
• The chairman of the labor union is always appointed by the factory, not elected by the workers, and the chairman is always the department leader or manager.
• The factory does not report work injuries
• Verbal abuse is common at the factory.
• The factory recruits student workers through dispatch companies, as student workers sent by schools are subject to many restrictions.
• The factory violates the “The Administrative Provisions on the Internships of Vocational School Students” which stipulates that student workers cannot be recruited by agencies or dispatch companies but only schools. (Left: Workers on the way to work; Right: Workers participating in the fire drill)