NEW YORK – China Labor Watch (CLW) has revealed that at least 100 students making the iPhone in a Shanghai factory owned by the Pegatron Group have not received all due wages or had their wages deducted by significant amounts.

During the summer school break, Pegatron Shanghai hires thousands of student workers via labor dispatch companies or employment agencies. CLW’s earlier investigations (published on July 29) revealed that many of these students did not receive full wages or did not receive wages on time.

CLW’s follow-up investigations have revealed that the scale and depth of students’ unpaid wages and deductions at Pegatron are shocking. As of September 9, 2013, about 100 student workers have already confirmed with CLW that while working at Pegatron Shanghai, they were not paid for 20 to 30 minutes of daily mandatory overtime meetings, had wages deducted, or only received 80 percent of the wages of normal workers despite doing the same work. Many other student workers, who have not yet been reached, likely have suffered the same unfair treatment.

These 100 students are from three schools: Henan University, Nanyang Fifth Secondary Vocational School, and Hubei Changjiang University. 33 of the students from the former two schools have signed their names to documents, given to CLW, that indicate unpaid or deducted wages and demand the return of those wages. The remaining students could not be reached in person to sign their names, though they have verbally confirmed that they too have unpaid wages from Pegatron Shanghai.

CLW has communicated with students from these three schools, but based on CLW’s undercover investigation, wage arrears and deductions are common violations among many of the thousands of student workers who were employed at Pegatron during this year’s summer break.

As displayed in the images below, student workers entered Pegatron as either normal workers or interns. Both types of students worked the same long 12-hour shifts on production lines, including mandatory overtime and daily unpaid meetings. Student workers chose to work at Pegatron during their summer breaks in order to earn a little extra money, sometimes using this money to reduce the burden on their parents to pay for their education.

Wages were deducted in two ways. First, 600 RMB ($98) was deducted from the wages of non-intern student workers for not completing three months of work, even though students’ summer breaks are only two months long. This effectively means that these students worked eight days of their two-month stints for free.

Second intern workers at Pegaton only wages about 20 percent less (600 RMB or $98) than those of normal workers and were forced to pay 500 RMB ($81) in fees and deposits. This occurred even though interns, more often than not, are studying subjects totally unrelated to work on a production line, such as communications.

Furthermore, students workers at Pegatron did not receive pay stubs that clearly explained how their wages were calculated, so they are unclear about just how much Pegatron owes them.

Document 3 below displays a number of other grievances that student workers at Pegatron Shanghai created based on their experiences there.

Last week, CLW provided Apple with information on student workers’ wage arrears. In an email sent to CLW right before the finalization of this press release, Apple said that Pegatron has allegedly recovered the deductions of a number of student workers. Pegatron has also allegedly prohibited employment agencies from deducting wages from workers going forward. CLW has been able to confirm with a handful of these students that they did in fact get back the 600 RMB deduction, but there are still some students that have not yet received this repayment.

Despite this preliminary response, Apple and Pegatron have not yet accounted for the wage repayments of potentially thousands of other student workers. The companies have also not accounted for the daily unpaid overtime or the reduced wages of student interns.

CLW does not have the resources to efficiently track down and confirm the approximately ten thousand students that worked at Pegatron Shanghai during this summer. CLW calls upon Apple and Pegatron to use internal records to find these students and ensure that they are given their rightful wages.

Document 1 translation (note: all identifying information has been altered):

We are students from Henan University. During the summer vacation from July to August 2013, we, around 60 students, went to Shanghai, working as production line workers in Pegatron Technology, which we entered through labor dispatch companies or employment agencies. The primary reason we worked there was the hope to relieve the economic pressure on our parents to pay for our schooling.

In the factory, we worked and lived the same as other workers without any special protections. But our wages were deducted in a variety of ways.

All workers must arrive at work 10 to 20 minutes early to participate in roll call and a meeting. The meeting after work is even longer. But this mandatory overtime was not calculated into wages.

Some of us entered the factory as interns, having 20 percent of their wages deducted, despite our work being the same as a normal worker, including mandatory overtime work. Additionally, though our vacation from school was less than 2 months, we were compelled to sign a three-month internship agreement, each of us paying a 300 RMB agency fee and a 200 RMB deposit.

We are now requesting Pegatron (Shanghai) Technologies Co., Ltd to pay our full salary in accordance with the law. This includes but is not limited to the following items:

2. the 20 percent of wages deducted from interns’ wages;

3. wages deducted for not finishing three months of work.

We hope Pegatron (Shanghai) Technology Co., Ltd (Shanghai) will live up to its social responsibilities, comply with Chinese law, and stop infringing upon the rights of workers, including students.

This document displays a number of other grievances that student workers at Pegatron Shanghai created based on their experiences there. 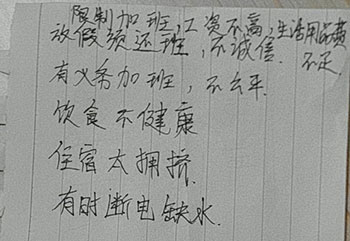 2. Workers of levels 1, 2, and 3 will have their wages increased after two months, while there is no increase for level 4 workers. Level 3 workers’ wages are increased by a third. Level 4 workers are the least fortunate.

3. Mechanic and inhumane management. There are a lot of deductions. When resigning, some things must be submitted otherwise there will be deductions. For example, a lock is 25 RMB (5 times its original price).

4. Extremely distrustful of workers. Luggage has to be checked when leaving.

5. Inhumane training. Long periods of standing has often led to fainting, which shows a lack of concern for workers’ health.

6. Night shift is bad for workers’ health. The night shift subsidy is a pittance (9 RMB)

7. Hiring is done mainly through agencies, which cannot guarantee the protection of workers’ rights.

Limits on overtime work. Low wages. Money inadequate for living necessities. Taking leave requires those days to be made up. Dishonesty.

Mandatory overtime, which is unfair.